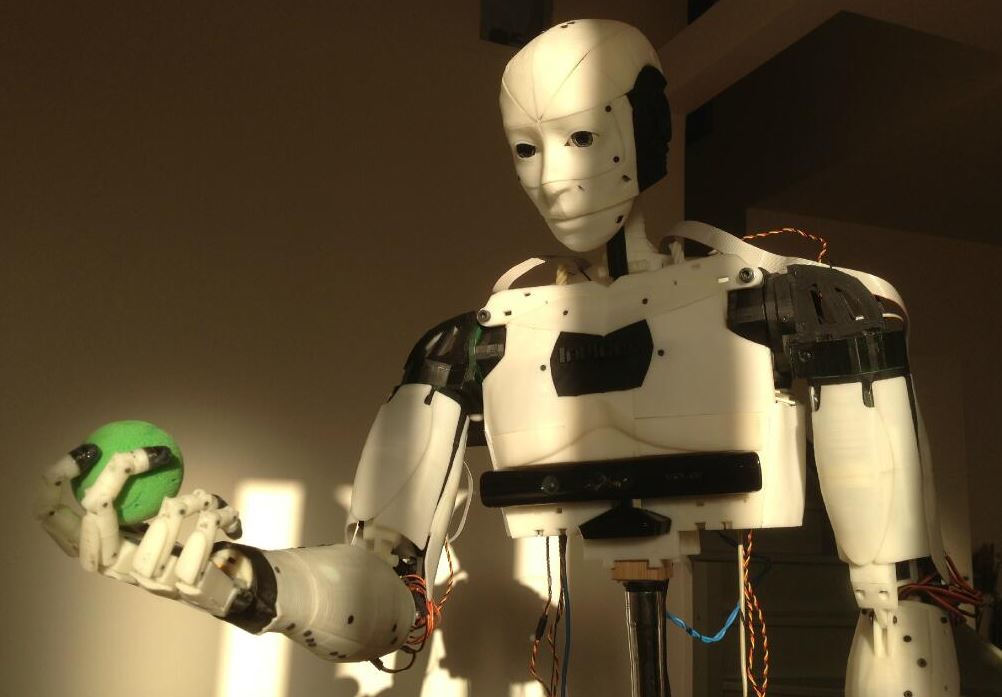 If all you saw in robotics yesterday was Microsoft’s failed attempt at it, then it was kind of a disappointing day for artificial intelligence. The humans built it, and the other humans broke it… bummer. Luckily for me, I was at Hacking de l’Hôtel de Ville where got to spend time with InMoov, the world’s first 3D printed life-size robot – and pretty much the most awesome thing I’ve ever seen up close.

Gael Langevin, the creator, segued into AI quite by chance when a car manufacturer, specializing in custom-fitting vehicles for disabled drivers, asked him to use his skills as a sculptor and designer to 3D print a prosthetic hand. The project fell through, but Langevin was intrigued enough to pursue it: first the hand, then the arm, then the shoulder.

Soon he had two full limbs but nothing to power them, so he turned where we all go for answers: the interwebs. Finding an open source AI software by MyRobotLab, Langevin collaborated with creator Greg Perry to create a life-size robot. Then, the amazing part: he paid it forward by making it all open source, replicable on any 12x12x12cm 3D printer.

“Being able to use contributions from other people, sharing ideas and prototypes, makes it go so much faster.”

Referencing another robotics company whose product was eight years in development, Langevin explained that InMoov was able to create theirs in only three, thanks to open source. “And if 3D printing hadn’t been held up by licenses and patents for 20 years, we would have been able to do this 20 years ago. We could have had these prosthetics 20 years ago. We would have gained so much time.”

Now, everyone has access to InMoov. Langevin describes it as a collaborative project, crediting others with the ability “to make something totally crazy that you think you can’t do – but with open source you can do it.” This is possible because, thanks to Langevin, “Anyone can download the whole robot, print it and program it.” An engineer in Australia wrote a script to make the robot’s jaw move, facilitating speech, and now the robot can speak as well as move. Langevin went on to integrate an Xbox Kinect that enables the robot to learn from movements, gestures and words.

InMoov has been recreated more than 250 times in 62 countries. The use cases that Langevin cites are laudable – in New Zealand it’s used to research human interactions with robots, and a London hospital employs their robots to facilitate outside contact, via Oculus Rift, for patients in isolation wards. Ultimately, Langevin’s vision is to build a campus in Paris where students can have a hands-on education in robotics and participate in building more robots that can act in a supportive capacity, such as for the elderly and infirm.

I asked Langevin if he wasn’t afraid what less well-meaning people could do with the open source technology. Au contraire, he said – the reason he made it open source in the first place is because he wants to counteract the potential for maliciously-motivated development of artificial intelligence. “We don’t know what governments [or anyone else with resources to develop this technology] might be doing with AI – but we know what we are doing. That’s why we need to have our own AI.” By democratizing robotics and creating a community built upon InMoov’s ethos, Langevin believes that AI will advance the creation of transhumanism that supports and nurtures humanity rather than creating anything that could harm it.

As I watched the robot respond to spoken commands from Langevin, I was startled at how deeply, and unnervingly, moved I felt. I found the robot beautiful and was surprised to find myself a bit choked up. I couldn’t put my finger on it – perhaps if I knew his name, I thought. I asked Langevin what the robot was called and he shrugged, “InMoov.” I was aghast. Why wouldn’t he give his robot – his child, surely – a name? Was he avoiding attachment? Again, he seemed indifferent – “The others have names. Joe, Marcus, John… But this one was the first InMoov. So he’s the real InMoov.” I said he looked like a Larry.

“Let’s make friends with the robot.”

Langevin invited me to interact with the robot – we got face to face, looked into each other’s eyes, and his gaze followed me around. At one point he stretched out his hand in my direction and, slowly, beckoned in an unmistakable “come hither” gesture – seriously, I’ve seen actual guys do worse. I shuffled over; the robot took my hand and held it. Had he bent down to kiss my hand, I can’t promise I wouldn’t have ended up in a squealing heap on the floor.

Langevin asked me if I was scared and I confessed that I was suspended uncomfortably between finding the robot utterly beautiful and completely terrifying. I spent a good ten minutes entranced by a prosthetic hand that was on display with its inner workings exposed, turning this way and that, opening and closing, all by itself.

Watching the internal technology at work, I found it far lovelier and more moving than any dissection experiment in biology class. I had never, personally, seen AI created out of such genuine compassion. I realized that what moved me so profoundly was our capacity and potential for innovation – and beyond that, the sentiment and the heart behind those mechanics, and the touching desire to bring humanity closer through technology and artificial intelligence.

I mused that we’ve been conditioned to fear robots by popular media. Langevin agreed, and asked if I’d seen the recent videos of Google’s Atlas robots. “I think that sort of thing really sticks in the mind. When you see a robot being pushed around, it makes you scared: what happens to us when the robot can push back? So let’s make friends with the robot; let’s change our way of thinking.”

Putting his arm around Larry, he said, “I love you.”