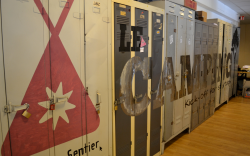 According to LinkedIn, LeCamping‘s manager, Alice Zagury, and the most recent Entrepreneur in Residence Oussama Ammar, will not be joining LeCamping for another season, and have instead partnered up to launch TheFamily. Described as an “accelerator for early-stage startups to support them from [0] to [1] through education & unfair advantages,” TheFamily sounds quite similar to LeCamping itself, which beckons the question “why leave?”

As Paris’ 1st real startup accelerator, LeCamping gained quick notoriety through their presence (mostly in the form of Alice herself), at international events like SXSW; however, as the seasons marched on, the general sentiment (or at least, my personal sentiment) has always been “why join?” My primary complaint has always been that LeCamping doesn’t take a stake in their startups, and they don’t offer (much) money, most of which goes to lawyer & accounting fees for services chosen by LeCamping.

This is why I was pretty excited when rumors began to circle that even LeCamping’s own staff was getting frustrated with LeCamping’s political and non-profit ties (it’s managed by Silicon Sentier, a non-profit), which seemed to be impeding them from setting up an investment fund. Former (anonymous) LeCamping teams told me back in December that Alice & Oussama were looking to build a new accelerator, a private one that would allow them to really invest in startups.

I reached out to Oussama & Alice about their new venture, though they declined to comment for now, saying that they are still “under the radar,” although not enough so that they haven’t updated their LinkedIn profiles with a quick blurb about The Family. They registered the domain TheFamily.co back in September 2011, and Alice’s auto-response email on her former LeCamping email address confirms the domain is theirs: “After a GREAT adventure running Le Camping, I’ve decided to follow the path of entrepreneurship and start my own business.”

The question remains how LeCamping’s season 4 (applications still open) will be able to function without Zagury, undoubtedly the heart of LeCamping – or at least, the network.