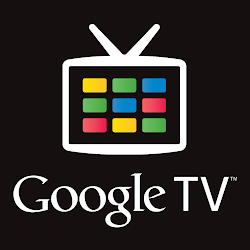 As promised by Sony Chief, Philippe Citroën, GoogleTV is now available in France. While it is not a nationally recognized jour férié, Google TV wants to invade your home and offer a novel entertainment experience.
Via ethernet cable or WIFI, your mundane TV can access the internet on the default web browser, Chrome. The following products (with affiliated partnerships) are formatted specifically for your TV: Pluzz, YouTube, Google Play, Amazon Instant, AOL HD, BuddyTV, Flixster, HBO Go, Pandora, Netflix, Music Unlimited (Sony Entertainment Network), Crackle, Redux TV, Qello, and Google Plex. This sounds more like a Google makeover for TVs at a 199 € price tag! (At 299 € for an integrated Blu-ray player but will launch in a few months notice.)

So let’s just skip to the GoogleTV specs:

The Sony NSZ-GS7 has a double-sided remote with an ‘AZERTY’ keyboard on one side and a multi-positional sensor-equipped gaming device on the other. The keyboard assists with web functionality and browsing the 1,000 or more apps. Bluetooth connectivity allows for Wii-like game features, namely fighting the air. However, gamer’s might find the triple-axis movement limiting compared to PS3 sixaxis movement on the wireless controller. While GoogleTV offers a plethora of nice features don’t expect enhanced local and international channel listings that might actually improve the TV viewing experience itself.
Since the pay-per-view market largely dominates in the US, GoogleTV works excellently with cable and satellite providers, namely the Dish Network. For this version of GoogleTV, French channel listings fall short. Pluzz is the only French-specific on-demand media service for Google TV. The online public broadcasting service includes France 2, France 3, France 4, France 5 and France Ô but excludes content like major feature films, and delays sports events like the Eurocup finals.
But, how is it different from AppleTV?

AppleTV’s retail price begins at a 109 €. The AirPlay is a distinct and necessary feature that allows your TV to stream iOS media content from your Macbook. GoogleTV does not allow cloud streaming although it is Android compatible. With iTunes Match, at 25 €/year, you can also access your music library on the iCloud. While you’re on the plane to Rwanda you can watch a Hitchcock film on your iPad or redownload it on other devices as many times as you want. Just be aware that with streaming functions the visual quality becomes less crisp. If you are a Mac, and you have iOS compatible products filling your purse- avoid GoogleTV like the plague.
But, am I really missing out?
Some of the subtle advantages in opting out of the extra gadgets is an unadulterated TV viewing experience. TV sans wifi also allows you to discover channels and shows ‘on-foot’ instead of having a guided experience that promotes mindless web surfing. Keep that in mind the next time you schedule a TV season finale party with friends…you might end up on Twitter during commercial breaks.