While he is most likely sunbathing in the infinity pool, he is officially Head of Marketing at Crowdonomic with founder, Leo Shimada, Head of Business Development, Nicola Castelnuovo, and CFO, Eric Tay.

His journey began from announcing the swift ‘failure’ of an eco-friendly online fashion boutique to plunging head first into the start-up scene in Singapore.

In 2012 alone, Singapore’s companies experienced a 65% increase in shareholders from France. Alongside the French investment was a 264% increase in Chinese company registrations putting to shame proponents of the Made-in-China or Made-in-France franchise. A country known for banning chewing gum may actually gain celebrity status in tech investments.

Among the challenges Kevin faces are the “chicken vs. egg” dilemma. Crowdsourcing in Asia hits a few obstacles in educational/awareness. Despite the concerns, Crowdonomic, Kevin’s new baby, witnessed the success of one campaign within 48 hours of its launch-100% funds raised. 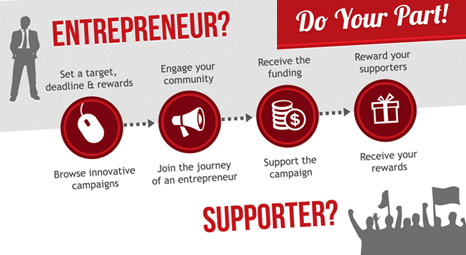 Built in and around social media, the crowdfunding success is made possible by the cumulative actions of its many unsung heros- supportive users. Crowdonomic’s reward-based crowdfunding platform acquires users based on the behavior of its early adopters, giving them a financial and exclusive interest towards the release of the product.

Unlike, Kickstarter the community is not nearly as heterogenous, the team and Crodownomic community are entrepreneurs focusing on the start-up specific campaign goals. Apparently Kickstarter entrepreneurs win Oscars- not the top goal of most start-ups. In November 2012, the beta launch was backed by venture capital firms and investors from the US and Asia.