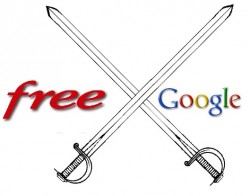 As the incident known as #Adgate rolled out yesterday afternoon, first noticed by PCInpact, it seemed that a new update to Internet Service Provider Free’s Freebox, which provides fixed line internet, tv, and telephone services (“Triple Play”) to households, had activated an opt-out ad block to all Freebox users.

As the story unfolded and various users and bloggers reported in, it began more & more to sound like Free was specifically targeting Google properties – Google Adsense (their in-site ad network), YouTube videos, and even Google Analytics, according to some. Obviously, this is a poorly thought out decision, and an even worse execution.

While sites like LeFigaro reported their ads were affected, it was not surprising to find out that LeMonde, half-owned by Free owner Xavier Niel, was still serving ads at 100% to users.

You may wonder why Free, who has been notoriously strong in communication, would do such a bonehead move, essentially wiping away the one thing they had going for them: street cred (’cause it sure wasn’t their amazing network or customer service).

Free v. Google – This is going to be huge

Xavier Niel’s Free has been butting heads a lot with Google in the previous months, having starting a while back with their fixed line network; this past August, users began pointing out that YouTube videos loading particularly slow on smartphones on the Free Mobile network. Free confirmed the allegations, saying that if users were having trouble on YouTube, they should “just go to Dailymotion – it has the same videos usually.”

Now in negotiations with Google over bringing the bandwidth for YouTube videos and other Google properties up to full speed, this move by Free was likely meant to give them something to negotiate with, holding Google’s ad revenue hostage; however, Free likely miscalculated how quickly users would catch their “beta test,” and now will have to answer to Fleur Pellerin, who tweeted her discontent, saying she would be discussing with the telecom operator, who she’s seen a lot of recently.

Many internet users called fowl play on those angry at Free, saying that many people already have AdBlock Plus, and that this should be a ‘wake-up call’ to website owners who should look for better business models. I personally enjoyed professional independent French blogger Korben‘s take on the matter, but I will just say that, if you do not own your own blog and try to make a living off of it, do not think that what sort of almost debatably works for the New York Times will work for someone generating 100K visitors per month.

Advertisements, theoretically, provide a great way for audience-generators to provide access to interest parties in front of that audience, whether it be a sole sponsor of a web site, sponsored articles, or sponsors at an event – and the more users push out the only way for bloggers and media companies to monetize an audience unwilling to pay for what they read (which they shouldn’t have to, as information has always been free), the more users are passively agreeing to pay for the content they read.

Information has always been free – and someone has always been willing to pay to get their name in front of that audience. Just look at the King James – he got a front-page ad on the first information ever printed!