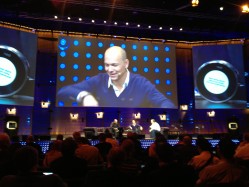 LeWeb is in full swing today, and the event kicked off powerfully with Xavier Niel, founder of Iliad (the company behind 4th biggest Telecom giant Free Mobile), interviewing Nest founder Tony Fadell. Prior to founding Nest, Tony Fadell worked at Apple, where he was deeply involved with the development of the iPod and iPhone – “my baby” as he referred to it on stage. Now working on connected thermostat product Nest, Tony Fadell started off py painting a picture of the thermostat market (bigger than stoves/appliances, 10 million thermostats sold per year, 30-40 old technologies used in current models).

“How did you go from building the iPod to selling Thermostats?” 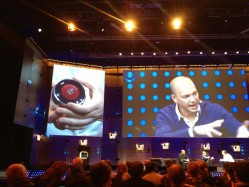 During the interview, Tony Fadell talked about the source of his inspiration – remodeling his house, and finding the thermostat technology grossly out of date. Despite the fact that thermostats are in every home, and that it determines nearly 50% of our energy bills, there was no innovations in the space since the 70s & 80s. Fadell said that from then on, he knew he had to solve this problem, and he spent nearly two years designing and developing a product-centric, technologically advanced thermostat, Nest.

It was pretty nice to see Loic push Tony about his European plans. Tony skirted around the question of whether he’d have a physical presence in France, but it was quite clear that a “European” presence is key, but not necessarily a French office. Nest is currently present in 63 countries, despite being sold in only 2 countries – the US & Canada. Tony noted that the interesting part of selling a connected device is that you can literally watch devices come online in Siberia, Europe, South America, etc., as Tony alluded to.

LeWeb with a touche Française

It was quite nice not only to see Xavier Niel (who is notably less chatty and dynamic in English than in French) interviewing on stage, as well as having Loic pushing about the French market. I wrote last year that the only thing French about LeWeb was its name, but it seems that this sentiment won’t be repeated. LeWeb is kicking off strong, and I’m sure there will be plenty more announcements to come.