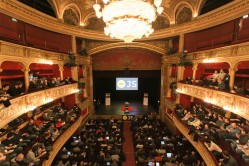 DotJS is a top international tech conference on JavaScript that took place last Friday in Paris and gathered 600 attendees. I’d say that more than half of them were from out of town, based on a show of hands. The organizers pitched it as “not a regular conference”, which shows at first sight by the choice of venue (Théâtre des Variétés, see photo below).
The format and the quality of the talks was very reminiscent of TED. Actually, Sylvain Zimmer, the master of ceremony, is also a co-organizer of TEDxParis. The line-up was pretty impressive, too. Let me skim over the tech talks before saying more on the two Open Source talks that will be of interest to non-geek types as well: 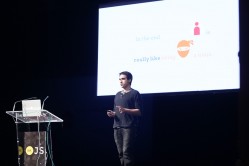 Charlies’s talk started from the observation that open source does not market itself(!), and went on to discuss leadership in Open Source projects. What is it then, being a leader in the OS world? Well, first of all, it’s not being a mom, nor a king, nor is it policing. Leading and managing can’t be done by a robot, because it’s about people, knowing and listening to their needs, their aspirations, what makes them happy, stressed, etc. It’s about being an enabler, asking “what do you need to be successful?” and making sure everyone has what they need. It’s about communicating (e.g. letting people know you’re busy if you’re having a hard time replying to all pull requests). In the end, if you do your job well, people won’t really notice you, so you can think of yourself as a ninja!

“When you do things right, people won’t be sure you’ve done anything at all.” God Entity (Futurama)

Being a leader is more like being a detective, a referee (set some rules but let people do their thing). It requires strength of mind and character. The role of a leader also encompasses some teaching, and a lot of emails to reply to!
Finally, the specificity of Open Source communities is that they are organised in distributed systems: there is no hierarchy, but the way people are connected is more like a graph. At GitHub, for instance, it is said that there are no managers, or as Ryan Tomayko puts it, “everyone at GitHub is a manager.”
Charlie also mentioned that previously he’d worked in the finance industry, and he noticed that Bloomberg had recently started open-sourcing some of its code.

“What the fuck is Open Source and why do I feel so guilty?” 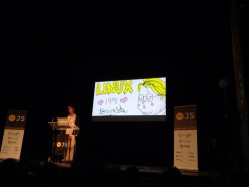 This talk could have equally been entitled “the tragedy of open source”. fat gave a — creatively illustrated — history of the Open Source movement and some of its main actors, Richard Stallman, Andrew Tanenbaum, Linus Torvalds and Eric Raymond. He then mentioned the Sourceforge code repository and community and the novelties that GitHub introduced in 2008. First, there is the use of the Gitversioning system, which has the particularity of making it easy for people to work on their code in different “branches” and, when they’re done, ask for their work to be merged into the main project — this is called “pull requests”. In addition to this, there is the social aspect: you can “watch” (i.e. follow) and star projects.

"you can get mad babes from open sourcing"
– @fat #dotjs

Fat’s perspective on GitHub was particularly interesting. Basically, he said that Open Source projects grew much quicker than in the past. In his own words, a “puppy” side-project could quickly turn into a monster dog, and you’d be spending much more time than you’d planned initially closing issues and answering pull requests. In the GitHub world, time to burnout accelerates, and OS project creators start looking desperately for exists. Some lose interest, which unfortunately results in a drop in quality of their projects.

So, how was the conference?

As you saw, there was an alternance of fun, technical, informational, business-like, and almost philosophical talks. I found that the speakers were brilliant and approachable. Very few laptops were open during the talks, which testifies of the quality of the talks. The conference was, indeed, very much unlike other conferences. The topics of the talks were a total surprise, since they hadn’t been announced prior to the conference. Unfortunately, this wasn’t to the taste of everyone and some called it a disappointment.

#dotjs disappointment. As if the speakers were asked to *not* talk about their work. Thankfully some speakers ignored the request.

Overall, I really enjoyed the conference and learnt a lot, also at the workshops (I’d call them tutorials) on the saturday. I went to the WebGL one and got a chance to learn from the best (Mr.doob and Martin Görner).
There were a few glitches along the way, though: massive queue for registration outside the theatre (the temperature was close to 0°C in the morning), microphones weren’t working properly during the first talk, questions were to be asked through Google moderator but it was impossible to connect to the wifi. The DotJS team was quick to improve / fix things and continuously asked for / listened to feedback. But I have to say, even though the venue was impressive, the cramped corridors made logistics impractical. There were two lunch serves and some people complained about how long the lines to get food eventually became (but the food was really good, especially the ravioles de Romans!).

Look out for the next DotConferences

In his closing address, Sylvain announced a series of similar tech conferences in 2013, the DotConferences. He’s had quite a lot of success organising global events in English with his Joshfire mates Thomas Bassetto and Steren Giannini, such as Paris Hackers and HackDay Paris. Let’s wish them even more success for future events!