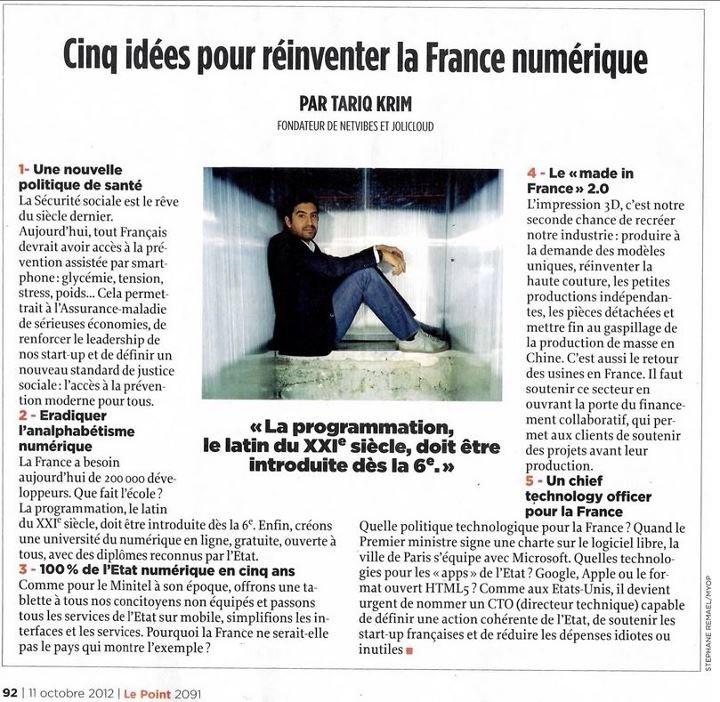 There’s been much debate this week across the media about whether the government’s digital agenda as presented by Fleur Pellerin is truly proposing anything new and, with initiatives such as ParisTechCity, whether it might actually be going in the wrong direction.  While it’s true that it’s undoubtedly positive that digital economy is playing such a prominent role in the governement’s agenda, it’s hard to see many new and innovative ideas coming from them.  But I suppose the logical question is should the ideas even be coming from them?  Many would argue that as a general rule, it makes a lot more sense to look to (France’s) entrepreneurs to shake up the status quo.  Tariq Krim, the well-known and charismatic founder of Netvibes and Jolicloud, stepped into the debate this week offering his “Five ideas for reinventing digital France” in Le Point.  He proposes the following:
1. Leverage technology, namely smartphones, to transistion to more of a prevention rather than treatment approach to healthcare
2. Incorporate technology education earlier (from 6eme) and more broadly into France’s education system, including creating an accredited, free online university.  He also suggests that this will help address France’s much debated developer shortage problem (projected at 200k)
3. Put in place a goal for the government to be 100% digital in 5 years by leveraging mobile devices to simplify interfaces and services.  He also makes an interesting analogy to Minitel, suggesting that the “put a Minitel free in everyone’s home” strategy could also be taken for mobile devices.
4. Lead on innovation around 3D technology as a means to reinvent France’s industrial sector.   He projects that not only will this establish France as a global leader in this area given than 3D could revolutionize whole sectors and processes (i.e. fashion or product development), but this also offers a chance to address France’s unrelenting manufacturing job loss.
5. Similar to the US, establish a CTO for France.  There are various people in the government, of course (ministers, delegate ministers, representatives, associations etc), responsible for proposing and advancing policy for France’s tech/digital sector.  However, I think what he’s proposing here is someone is a CTO in more of the traditional sense.  So, perhaps, someone with more of a tech background?
The interesting thing about Krim’s ideas here is that he’s looking to kill many birds with one stone.  So, essentially, he’s asserting that technology will not only address our economic problems, but also our societal ones (education, healthcare, etc).
Obviously, these types of things are being attempted elsewhere, including in the US where similar ideas were proposed and debated during the ’08 election and started during Obama’s first term (ie green tech and healthcare).  However, it’s clear that to make these types of things workable there has to be a government-wide will to take them on, a clear, actionable plan to turn these ideas into reality, participation from the private and public setor, and an understanding that results on these types of things rarely happen quickly.  In any event, it’s certainly better than not to see France’s entrepreneurs offering ambitious, audacious ideas to improve the current situation.  In recent weeks, the government has shown itself open to listening to what the entrepreneurial community has to say.  Here’s to hoping that expands beyond the current tax debate to the broader digital agenda.