Reported across the interwebs this week was the assault of Steve Mann, a renowned PhD engineer who works on creating technology for the visually impaired. The device surrounding the event was his own invention, the Digital Eye Glass, which resembles  The more unfortunately part of the story, other than the fact that it happened in a McDonald’s, was that it happened in a Paris-based McDonald’s. McDonald’s France, a practically wholly independent subsidiary of McDonald’s USA, spent years taking the fast-food model and adapting it to France[Daily Finance] – building a McCafe inside of McDonald’s, serving LaDuree-esque macaroons and croissants.

Back to the Digital Eye Glass Story

Steve Mann posted on his blog earlier this week recounting the tale and calling for help from the community. As seen in the photo, Steve Mann wears a permanently attached Digital Eye Glass aids his vision impairment – the story if available on the blog, but, in short, perpetrators, at least one of which was allegedly an employee at McDonald’s, unsuccessfully attempted to remove Mann’s Eye Glass from his head. After shredding up his documentation of the Digital Eye Glass, they kicked him out of McDonald’s – and if all that wasn’t believable enough, the Digital Eye Glass logged the incident with a photo-by-photo account of the entire incident, including capturing badge names and facial IDs.
Mann pointed out that this isn’t the first physical assault of a photographer in a McDonald’s in France, but noted that all attempts to contact authorities – embassies, local police, McDonald’s Corp. – have been unsuccessful, and so he called to the internet for help.

Hi @STEVEPMP We take the claims very seriously, are in process of gathering info & ask for patience until all facts are known. Thank you 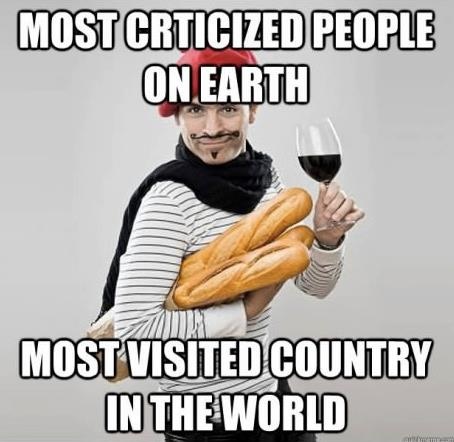 While the feud is still unresolved, I would normally say that this yet another blow to the international view of France – that we’re just a bunch of assholes. Putting aside the fact that this story could’ve been reported as happening in any country and it would’ve been equally as awful – for example, check out the 13 most violent things that ever happened in a McDonald’s, or read up on the Strip search prank scam on wikipedia. But it’s all a question of perception. If the first thing international tourists see when they arrive in France is the RER B, there is certainly a problem of perception.
There’s certainly a need to get France a little more worried about what people think of them – it’s oddly enough the same problem Californians have, hence my theory that France and California are the same location in different universes. Nonetheless, the point is: rally together and get people talking about this incident, so that we can get some justice for Steve Mann. He’s currently only asking that McDonald’s pay for the repair of the invention he built and patented in 1999.