Last year around this time I wrote that 2013 would be the year of “Passive.” The main reasoning I used to argue this point was the number of apps that I had encountered which needed me to commit to a certain level of activity in order to ‘learn’ about me. This past year, I can safely say that I’ve run into very little apps requiring an active learning curve – even when I switched from Spotify to Deezer – however, more importantly, my usage of apps has actually become passive. My Runkeeper reminds me when to go running, my Withings app reminds me when to weigh in, and overall, my relationship with technology has become more passive.

However, ‘Passive’ is just a stepping stone, the unloved cousin of ‘Connected,’ and the building blocks seem to be in place for a real revolution in the Connected space. Of course, you can jump to connected hardware, wearable tech – Glass & Gear and all that jazz – but, as Christopher Mims pointed out, 2013 was more or less a loss when it comes to gadgets, namely because the building blocks on which the Internet of Things is being built is not as developed as HTML. That being said, those building blocks are being developed at the same time as said gadgets – whether it’s Sigfox’s dedicated IoT network, Sen.se’s IoT API, IFTTT or other players – some are working to stitch together the ecosystem, others, like Arduino & Rasberry Pi, are looking to create the open standard that will enable any hardware to communicate with another piece of hardware.

The Return of ‘Hyperlocal’ via Beacons

‘Hyperlocal,’ a term that we may have thought was long dead, having watched the fate of Groupon & AOL’s Patch, may have merely been ahead of its time, with Beacon technology having come almost out of the blue in the past few months. Whether it’s Apple’s iBeacon, PayPal’s beacon or the Estimote – three players which were quick to identify themselves in the market – it seems that being location-aware in retail stores will play a huge role in the coming years, literally connecting stores to their customers.

Supply & Demand – there is nothing in between

Crowdfunding campaigns are still seeing year-over-year growth; though rewards-based platforms (Indiegogo, Kickstarter) are seeing significantly more traction than loan or equity-based crowdfunding, save perhaps the Lending Club & Prêt d’Union, which are challenging insurance companies & banks by crowdfunding loans. It’s not sure that other forms of crowdfunding will ever catch up in popularity; however, combined with the Sharing Economy rage that swept 2013 (Airbnb & the “Airbnb for Xs” which popped up), the world has become accustomed to cutting out the middle man, to having direct access to the end consumer, the original manufacturing, the person performing the service for which they are paying.

Will we see this same attitude being used to connect citizens to their government? To connect donors to the individuals receiving their donation? Where else are there middlemen getting in the way of more fluid communication between supply & demand? One such example is Dymant.com, the luxury eCommerce service (attention: invite-only) which, while it is intelligently riding the downfall of flash sales providing an alternative, curated eCommerce experience, is also consciously connecting independent luxury craftsmen to luxury goods buyers, something which luxury businesses like LVMH & PPR have been doing for years through collections.

3D Scanning/Images/Printing have also only just begun their growth. Both Consumer & Enterprise 3D Printing are listed on Gartner’s Hype Cycle in 2013, and with players like HP & Amazon jumping in, combined with traditional players like Stratasys & 3D Systems, means that we are only beginning to see how 3D Printing will (or won’t) change our lives. Sculpteo, Sketchfab & 3D Hubs are all companies to watch here. 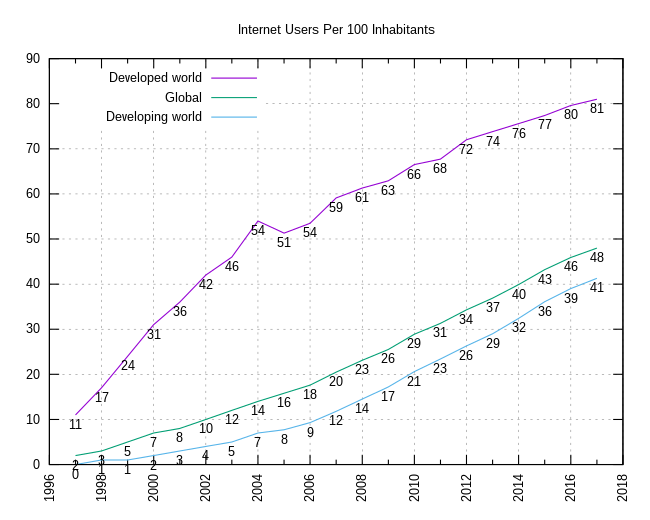 Up until now, the question has always been “where/how can we connect?” but we will soon hit the tipping point where more than half of the world’s population will have regular Internet access (source: Wikipedia). Initiatives like Google Loon & words from Facebook CEO Mark Zuckerberg this year suggest that the last frontier for growth in companies like Google & Facebook is in countries where citizens don’t have the internet yet.

In developed countries, where the majority have access to internet at home & on their mobile phone, the last frontier becomes Trains, Planes & Automobiles. Connected Car initiatives like that of BMW to put SIM cards in every car, creating mobile hotspots around your car, are just the tip of the iceberg. Train companies like SNCF in France are seeing increased competition, and one of the main differentiating factors is that all of SNCF’s competitors have on-board Wifi.

In-flight Wifi came & left a few years back with players like Gogo; however, in Europe, where planes legitimately compete with trains and long-distances buses, inflight Wifi may be the differentiation needed to keep digital professionals jetsetting instead of walking the train cars making phone calls & reading emails.

What if Glass & Gear are just the beginning?

When looking at hardware in 2013 – Google Glass, Galaxy Gear & more – remember that, before the iPhone & iPod, there was Lisa & Newton. Hardware technology doesn’t come in one fowl swoop, companies never know exactly what consumers want until it explodes. Apple has as many flops as successes, Samsung made dozens of phones before the Galaxy series became the most popular smartphone to date & hardware revolution has only just begun. When it becomes as easy to build a gadget as it is to launch a SaaS startup today, we can only imagine what hardware will explode out of the farthest reaches of the globe, in the same way that WeChat, Spotify, Skype & many of today’s hottest software startups have increasingly come from unlikely parts of the world.