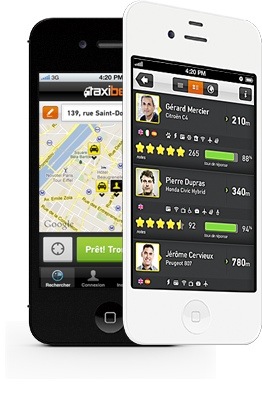 The world of smartphone-based intercity transportation has really been shook up, but Taxibeat’s Yelp for Taxi’s app puts a new spin on it, launching in Paris this week during LeWeb. While most players in this space – Uber, SnapCar, Chauffeur Privé – are working with a fleet of freelanced private drivers, Taxibeat is working directly with taxi drivers, allowing users to hail a taxi by smartphone, but also to rate the service afterwards. The story originally broke on Techcrunch this morning.
Much like Yelp provided a one-stop source for reviews on restaurants and other businesses, Taxibeat believes that bringing clarity to the service behind taxi drivers. Taxibeat provides photos and ID numbers for each driver, as well as a list of services and amenities available for each driver. The service is targeting independent cab drivers as well as taxi firms.
There is much competition in this space, and Taxibeat has been rolling out quite quickly, launching in Brazil, Norway, and Romania (in addition to its native Greece, and France). Uber quite successfully launched at LeWeb last year, though they certainly have not had the same kind of lawsuit-enduring success in Paris that they have seen in the US and other countries. Taxibeat will likely run into these same passive competitors – Autolib (Paris’s car pick-up and drop-off service), reliable public transportation, and the various Taxi competitors – and it will be interesting to see their approach to gaining traction in the world’s most visited city.
You can download Taxibeat on iPhone and Android.

Why Germany is tightening control over industry with Russian oil grab

How France is using AI to find thousands of untaxed pools

Ethereum Merge is complete, signaling the opening of a new period for the network.