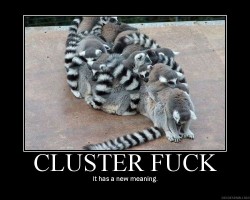 It seems like the four major Mobile Network Operators (MNOs) can’t stay out of the news these days, as Challenges reported yesterday that Bouygues Telecom (3rd largest operator in France) is suing Iliad ( parent company of Free Mobile, the 4th largest mobile operator in France, launched earlier this year) for €100 Million for an alleged “smear campaign that Iliad ran earlier this year. Bouygues Telecom has lost 210,000 clients since Free Mobile launched gloriously in early 2012 – Orange, the largest operator, claimed recently that it has “recovered” from losses sustained after Free Mobile’s launch. SFR, the 2nd largest operator, is rumored to be in discussions with Free Mobile about a merger, as SFR has taken an even bigger hit from the launch, having changed out CEOs earlier this year. Those talks may have been put on hold, as Bouygues & SFR have resumed discussions about sharing their network, as Reuters reported last week.

In Short, A Cluster Fuck

This kind of turmoil would shake up any major TelCo operator – think about the reaction concerning the Softbank Sprint deal and the AT&T T-Mobile deals this year. Now take the market we’re in, France, which is not used to such volatility and, well, instability. This was Xavier Niel’s entry point altogether, and he didn’t hide it at all – MNOs treat customers like garbage, because all the prices are relatively the same and where else are you going to go? Well, Free Mobile arrived and said “our network coverage may be less than 40%, and we may lack customer support, but we’re not Orange, Bouygues, or SFR” and French people literally overloaded customer support hotlines on Free Mobile’s launch day – not for Free Mobile (’cause they don’t have customer support, remember), but for Orange, Bouygues, and SFR. Everyone wanted to cut their contracts short. Bouygues shut down their support, claiming technical issues, and Orange gave customers the runaround, just trying to buy enough time to launch their competing offer, which had been waiting on the shelf for when Free Mobile launched.
You see, the 3 MNOs thought that Free’s only advantage was that it was cheaper, and that if they came out with equal or near-equal offers, that customers wouldn’t switch. What they under-estimated was how much customers in France despise their carriers. I have literally heard every combination of “Oh you have X? I have Y. Their not great, but at least their not X.” (by the way, that formula also works with French Banks, Grocery Stores other than Lidl, and cities other than Paris).
Free Mobile may be merged, or they may keep thinking that their old methods will work on this new enemy, Xavier. But this Professor X has a few mind games up his sleeve, and I suspect that the MNO market in France is only going to get more interesting as the war of attrition continues. Free Mobile has one timelimit, and that’s 2016, the date by which the MNO regulatory committee has said it must have its own mobile network, and the date after which its contract with Orange ends. Who will bleed the most users before they wave the white flag and sell Free Mobile the network they are required to have by 2016?