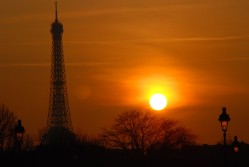 Fresh off of a round of funding, Teleportd, the startup behind Nitrogram, seems to be doubling down on its Instagram analytics solution. The startup sent out an email to its Capsules users last week announcing that its photo-embedding solution (which we’ve been using for months now) will no longer be available, but, instead, will become another feature of Nitrogram. In addition, speaking with Teleportd CEO Gabriel Hubert earlier this month, he revealed that their iOS application Teleportd will not be receiving updates in the foreseeable future.
In the email to users, Teleportd states that “Packed with Teleportd power, [Nitrogram] will enable on Instagram what you were doing with Capsules,” so on the one hand it seems like a logical transition for the team.
It seems that Teleportd spent a good amount of time playing around with several possible applications of its real-time photo knowledge; however, in the end, Instagram Analytics is a must-have for brands (The top 10 brands on Instagram have reportedly all signed up for Nitrogram), while these other tools & apps were simply nice to have. I can say that, while I use Capsules, and will continue to use Nitrogram for creating nice photo galleries of events that I’m reviewing, I can’t say that I’ve used Teleportd in the last 3 months other than to show off some cool French startups – I frankly just couldn’t wrap my head around why I’d want to use it regularly.
%CODE1%
In order to adjust quickly to the new Nitrogram interface, I threw together a quick ‘gallery’ on this weekend’s gay marriage protest, which brought in between 60-100K people in the street of Paris. The interface for Nitrogram still needs some work, but the learning curve is quick (especially if you used Capsules before). I had a little trouble understanding that “outlets” was where I went to get the embed code, but other than that I was able to search and select 7 good photos in a matter of minutes, choose the size of the photo album, as well as the style (either slider or tiled style). I’m hoping that Nitrogram will get a WordPress Plugin soon, as Capsules had, but this product remains the easiest way to throw together a photo album without having taken photos of an event.
For those of you who haven’t tried Nitrogram yet (requires an Instagram account to sign in), here are some screenshots below.