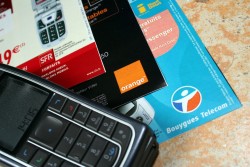 Another day, another drama in France’s chaotic mobile market.  France’s Authorité de la Concurrence (roughly translated, ‘Competivity Authority’) has announced that SFR and Orange have been found guilty of anti-competitive practices during the period of 2005 – 2008.  As a result, the Authority ordered Orange and SFR to pay €117.5 million and €65.7 million respectively.  Not surprisingly, they both immediately put out press releases stating they strongly disagree with the ruling and will quickly be filing appeals.

Well, what probably seemed initially to be a harmless and sensible promotion, actually turned out to be a real sticking point for the Authority.  The source of the problem was a promotion run by SFR and Orange whereby their subscribers were offered unlimited calling to those also on their networks (‘on-net’) , but were charged exhorbotent rates to call those on other networks (‘off-net’ – basically Bouygues).  The Authority felt that regardless of the attractiveness of this offer for consumers, it created a huge distortion in the market, which essentially blocked Orange’s and SFR’s customers on their networks and weakened Bouygues’ market position who, as a result, felt compelled to lauch new mobile offers that negatively impacted their profitability.  Of course this fine is paid to the Authority, so now Bouygues is going to file a motion to receive reparations as a result of the ruling and the ‘prejudice’ that they endured.
However, as the old saying goes ‘the enemy of my enemy is also my friend’.  While Bouygues is hitting up SFR for a boatload of cash on this ruling, they’re also teaming up with them to go after Orange for their “predatory quadruple play strategy” as reported last week in Les Echos.  Add all of this to the endless back and forth lawsuits, and recriminations between the operators (here, here and here) and one can easily conclude that the only real winner in all this will ultimately be France’s legal community.