Pretty Simple Games is a 40 persons social games company here in Paris, who’s just published Criminal Case, a hidden object game on Facebook. Another one, right? So why should you care? Here’s exhibit A : 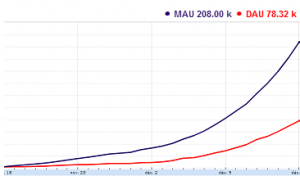 This is a hockey stick kind of growth – basically the dream of any company launching a scalable web product. Not even a month in, they’ve passed 200k MAUs, and the DAU curve is reaching 80k. These numbers are as of the 16th of December (source Appstats – always disregard last 2 days, it’s not real time and the figures only get corrected after 48h).
Add exhibit B to this, that is the sum they invested in advertising:a big fat 0$. What do you get? A game that shows true organic growth, does a great job at retaining players, and gets them to invite their friends to play as well.
Granted, they did do some soft cross-promotion from their other Fb games, ie banners at the bottom of the page, but didn’t do any of the much more powerful in-game mission cross-promotion. This was surely useful in seeding initial users to the game, but doesn’t come close to explaining this kind of growth. No inherently social gameplay either, so how did they do it? And if you think I’m going to talk mostly about viral design, like I did before meeting Bastien Cazenave, CEO and co-founder of Pretty Simple Games, think again.

The first thing I noticed when testing the game is the quality of the level design, and of the whole game itself – and I’m no fan of hidden object games. One key element in the quality of the content is the game story itself. It would be a euphemism to say that not all game stories are compelling. What this means in the hidden object genre is that players often find themselves looking for random stuff, but lack any real sense of purpose in their search for objects. Criminal Case, on the other hand, offers well-crafted investigative stories, which give purpose and depth to the scenes in which the hidden clues are to be found. 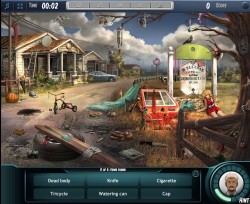 The gameplay itself is also markedly better than many of its competitors, as elements are placed at places that you use a mix of logic and observation skills to find. This is much more satisfying an experience than finding the seemingly random distribution of items in many other hidden object games, which are happy to make you find a dolphin wearing glasses and a top hat in a tree or some other kind of nonsense. That is not to say that Criminal Case objects are placed in too much a predictable way either, but I think they struck very close to the ideal balance here.
The technology behind the game is far from lacking either. With very quick to non-existent loading times, and lots of the sharing stuff happening behind the scenes, the playing experience is one of the least cluttered with interrupting screens that I’ve seen recently on Facebook. Last but not least, the art, with a team of 10 graphic designers behind it, looks very good, and converges to create the right kind of atmosphere for the game. This means that this game gets right the four pillars of a game : gameplay, art, technology and story.
This kind of result is no stroke of luck. Pretty Simple Games followed a very good approach, in that they didn’t define a specific launch date and decided the game would be ready when it would be ready. Iterating 20 times and delaying the release of a game as long as needed is something that not every publisher decides to do – or simply can do, for that matter – with hard deadlines sometimes coming in the way of quality. A telling thing in the interview was the sounds used by Bastien Cazenave to describe the feelings they were going for, as in “Aha!” moments, as opposed to the frustrated ” Ooo, pfff”, they sometimes got in playtesting, which denotes an understanding of the gaming experience at a deep emotional level, and rings of passion.
Their main financial backer IDinvest, and its representing board member Guillaume Latour, are now reaping the fruits of their patience, and of the manifest focus of Bastien Cazenave and the whole team on quality. Bastien Cazenave emphasized just how important the support of an investor of this quality can be – bearing in mind that Guillaume Latour also invested in Social Point (with runaway hit Dragon City), or other startups you might have heard of, like Deezer, Dailymotion, or Criteo.

Retention is key to durable growth, no news there. What might be more counter-intuitive at first, in a year that saw inherently social blockbusters like Draw Something or Song Pop take the market by storm, is that the social strategy of Criminal Case focused so much on retention. Of course there are mechanisms aimed at making people invite one another, as having friends within the game provide clues and energy. Energy is the main limiter to playing, and it’s a pretty tough one at that. On a side note, I respectfully disagree with Inside Social Game’s Pete Davison’s review, in that I believe that the energy system’s primary goal is virality and not a heavy-handed monetization tactic. What this energy system effectively means for a free daily player is that if she wants to play more, she’ll need friends playing. This is where the focus on retention comes back in play.
Why would you invite anyone to a game in order to get some in-game edge, if you weren’t hooked on the game to begin with? This is why a lot of the sharing activity, including wall publishing of rewards for big in-game achievements, and even app page community management, focuses on engagement and re-engagement of existing players.
By making a difficult choice that is in all likelihood reducing the overall number of invites sent, compared to titles where prompts for invites occur pretty much from the get go, Pretty Simple has achieved what seems to be greater stickiness than many of the aforementionned titles. When combined with strong in-game incentives for daily players to invite friends to come and play, this makes for a powerful virality mechanism, with the added benefit of it not being nearly as invasive as in many of its competitors.
Another difficult choice is focusing on Facebook when most companies turn to mobile games. The experience of the founders and what feels like a pragmatic acknowledgement that a small company can’t do it all at once means that they stick by their guns on this choice, and seem to be pulling it off pretty damn well. I do believe that they would leave a lot of money on the table if they were to delay releasing a mobile version too much, and they most definitely know that Criminal Case would be a great tablet game as well. It’ll be interesting to see what happens in this area in the coming year.

A company to watch

Pretty Simple had already seen a good success with its first game, My Shops. Though Magical Ride, their second game – a Jetpack Joyride meets Bubble Witch Saga theming – wasn’t exactly a home run, Criminal Case is shaping up to be a hit. I wouldn’t be surprised if it crossed the 1M DAU threshold, and this is certainly where the team wants to take it. Add to this a focus on team-building that rings even stronger than usual, a strategy of developing games they love playing, the intellectual honesty to recognize failures and go back to the drawing board as much as needed to produce a great quality game, and you’ve got a game company that could very well produce repeat hits and become France’s own Wooga.