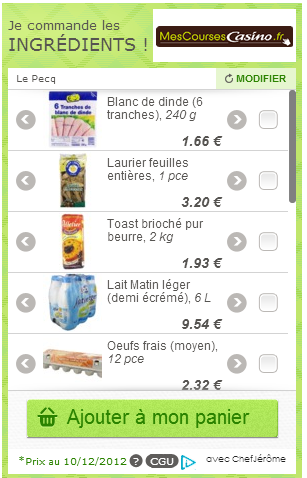 Earlier this month, I wrote about a few French entrepreneurs who are Stanford grads, or pseudo-grads – one of them was Chef Jerome founder Antoine Durieux, and today Chef Jerome went live with their recipe-to-online grocery list service, available on AtelierDesChefs.fr, a top recipe site in France. Very simply, the service appears next to any recipe on the site – like this recipe for hot chocolate with Nutella and basil – and lists the ingredients, which you can easily add to your online shopping cart for your neighborhood grocery store. ChefJerome has partnered with Casino – which also owns Monoprix, Franprix, and Leaderprice – but says that it is in discussion with the other major supermarket chains, include the #2 supermarket company in the world, Carrefour (#1 is Walmart, #3 is Tesco).

“We now know we have the most comprehensive semantic food dictionary in the world.”

Taking a recipe and pulling out the ingredients is pretty impressive as far as semantic machine learning is concerned; however, this isn’t Chef Jerome’s only advantage. The startup has built a comprehensive (and I mean comprehensive) list of food, as well as a semantic dictionary around the food terms, which they use to create the connections between the recipe ingredients and the available food in your local supermarket. This means that if they read pavé de Boeuf in the recipe, but Casino is out of stock, they can propose a faux-filet de boeuf instead, because it’s not quite the same cut, but it has the same quality and tenderness.

In addition, every term lines up to a Wikipedia entry, which means that any entry which is available in another language (say English), can easily be converted to its English equivalent. And as Antoine was quick to point out, the dictionary is built “outside” of language particularities – for example, the word “milk” doesn’t refer to “milk,” but refers to “cow’s milk,” completely different than “sheep’s milk.” Their dictionary is built from the ground up to account for this,adapt to it, predict what you’re talking about, and know what the nearest substitute is for each, not by name similarity, but in a purely culinary relation.

Room for improvement, room for growth

Looking initially at the product, I was pretty impressed. Antoine has been talking about Chef Jerome since I met him over a year ago, when he first decided to drop out of his Stanford Master’s program in Engineering, where he’d been for the previous year, in order to pursue Chef Jerome. Picking a random pie recipe, I saw that a few items didn’t line up, but Antoine assured me that those were substitutes for recipe items that weren’t available in the store – I would like to be informed of that, as well as what they’re replacing.
The service has a bit of trouble identifying where I was, and the Google Maps integration is rudimentary but these are things that can be improved. In its first week live, Chef Jerome has seen over 1 Million impressions of its recipe converter. He couldn’t reveal how many converted shopping carts that converted to, nor what the terms of the deal were with Casino or Les Ateliers de Chef, but he said “it’s enough to help us bootstrap.”
Chef Jérôme is currently a team of four engineers, with Antoine as CEO. Antoine seems confident that Chef Jérôme will not only be working with other grocery stores in the future, but that his semantic dictionary, which is not limited just to food but to all grocery store items, has several applications.
I apologize to our international readers for the French screenshots – the product is currently only available in France, but I think the images speak for themselves without text being written. With that, a video in French: