As widely covered in the media earlier this month, Orange (mobile) experienced a massive technical failure 6-7 july, which lasted approximately 12 hours and affected a substantial number of its 26 million customers.  Given Orange’s approx 40% market share , the failure was, not surprisingly, big news here and even caused the government to immediately jump into the fray.  It’s hard for me to comment on whether the length of time that it took to get everything back-up and running again was reasonable, but as an Orange client, it seemed awfully long.  Nonetheless,  as explained in a video they put out last week detailing what happened, Orange did appear to mobilise fairly quickly to resolve the issue.  In the video they explained that the problem was basically due to a data glitch in their Home Location Register (HLR), a key part of the network which identifies the location of each mobile device in order to determine where to route inbound and outbound traffic (funnily enough, O2 in the UK also had a similar outage last week due to a HLR problem).  One positive element of their PR strategy around the incident was that social media, particularly Facebook and Twitter, played a prominent role.  Of course, this was of no use to you if you were an Orange or Free customer trying to access mobile internet, but hey, it was still positive that a big (arguably), sleeping giant such as Orange put social media at the heart of their PR effort. Orange also took the wise actions of immediately apologising for the incident and promising their customers would be compensated for the glitch.  Although some Free customers were ‘virtually  gloating’ at Orange’s misfortune given Free’s initial technical problems earlier this year, many were also suffering as Free relies on Orange’s network to deliver its mobile services. 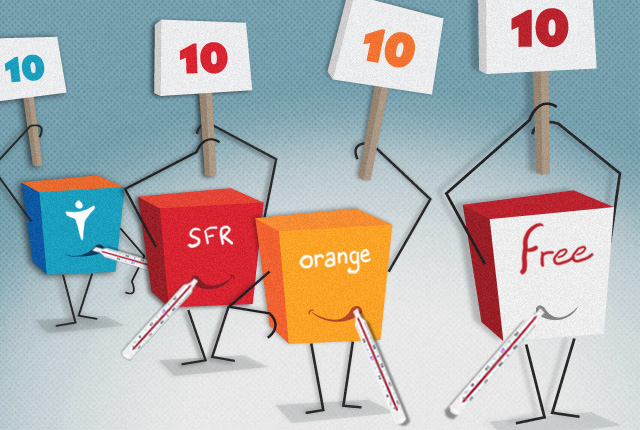 This massive glitch was yet another big event in what is shaping up to be a whirlwind year for France’s telecom sector.  As we discussed various times this year, the most important event thus far has been the big shake-up coming from Free’s entry into mobile with its incredibly low-priced (as well as low-service) offer.  Then, of course, came the predictably hostile responses from France’s established telecos to Free’s entry, including Martin Bouygues’ recent 7 page rant addressed to the French parliament.  Unfortunately for Bouygues, Free’s entry has been particularly difficult for them, contributing to their declining profitability and elimination of 556 jobs in 2012.  In his letter, Martin Bouygues asked that Orange’s contract with Free not be permitted to continue beyond its 2018 expiration date nor be permitted to expand to give Free access to 4G technology.  The principal argument underpinning his demands is that by delivering mobile services over Orange’s network, Free doesn’t have the same investment constraints as the three incumbents and, as a result, has an unfair advantage vs its competitors.  Martin Bouygues believes that this situation has essentially put the telecoms sector in an “auto-destructive spiral”.  Apparently Orange somewhat agrees with this reasoning as last week the CEO of Orange stated in an interview that he understands Martin Bouygues’ complaints and that Orange’s arrangement with Free was never intended to be a permanent one.  However, all this bloviating is likely to be just that.  Free has always said that it eventually needs to deploy it’s own network, of which it is currently in the process of constructing.  What will be most interesting to see is whether building and maintaining its own network will compel Free to increase their prices.  Even if they do move from their current prices, it’s doubtful that they will raise their pricing to the to the levels to the incumbents’.  So, as Free becomes more reliable and, ultimately, more credible, Mr Bouygues (as well as the other telcos)  is going to have to come up with a more substantive approach to competing with Free in the long-term.

Given all this activity, the government has decided that it needs to be properly kept in the loop on all the going-ons in the sector.  Minister Pellerin convoked each of 4 telco giants for a meeting which took place yesterday at which they were asked to explain in detail what was behind the massive outage (in the case of Orange) and what their procedures are in the event of a large-scale technical mishap (in the case of SFR, Bouygues, and Free).  Following the meeting, the Minister Pellerin announced that they will put in place measures in September to head-off the likely sector layoffs that have been an unfortunate consequence of the price wars.  In addition the government may also put in place a decree allowing them to audit the security of the telecom networks and mobile operator charges.  Although it’s been a rough year so far, it’s likely to get a lot more difficult for France’s mobile operators.  Between the more ‘activist’ role the government clearly wants to play in all this, the increasingly competitive environment, and the growing stress on their networks arising from continued growth in mobile traffic, mobile operators in France had better be prepared for a rough ride.