In case you missed it, last week marked the launch of Berlin Maniacs, a brand new French-language blog covering the Berlin tech scene. And no, it’s not a Samwer Brothers take on the Rude Baguette. But it does share many of our core values, and we’re happy it’s here.

Berlin Maniacs was founded by Nicolas Kayser-Bril, a Parisian who, three years ago, found himself out of a job and in need of lower rent. He moved to Berlin and fell in love with the city. Earlier this year, convinced that French entrepreneurs and startupers needed more contact with the red-hot Berlin scene, he started Berlin Maniacs along with editor-in-chief Anastasia Levy and in partnership with Silicon Sentier, which runs the French tech blog, Silicon Maniacs. 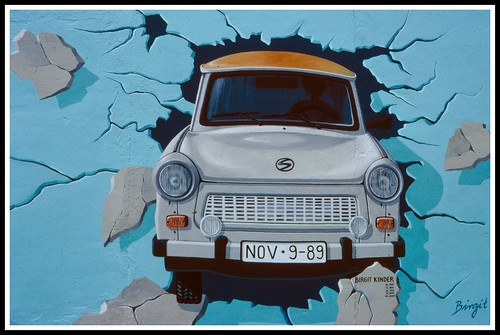 Go east, young entrepreneur
Kayser-Bril, who now splits his time between Paris and Berlin, is unapologetic in his enthusiasm for Berlin’s startup scene. “French entrepreneurs are excessively interested in San Francisco and London,” he says. He explains that Berlin now offers an alternative path to internationalization, especially through its strong connections to Eastern Europe and Scandinavia.
Their first posts amount to a manifesto of sorts, from chronicling the dizzying rise of Berlin in just a year or so to detailing the pioneering coworking spaces that pepper the German capital. The editorial focus is on opportunities for French entrepreneurs and tech workers in Berlin. There are already decent sites where you can read about the Berlin scene in English, but Berlin Maniacs is the first site to focus on the French angle — in French.

A tale of two cities
“Our goal is to help encourage exchanges between Paris and Berlin,” says Kayser-Bril. At first glace, though, it’s clear that in startup-world, Berlin in enticing Parisians and not vice versa. Just look at Berlin Maniacs’ recent weekly job post, which features 10 French-language job openings (this is in Berlin, remember) and and 13 English-language job openings. Berlin is booming.
Paris will never have Berlin’s cost advantage, but it’s important to remember just how far Berlin has come in such a short time. We should give Silicon Sentier proper credit for backing Berlin Maniacs, because this type of engagement with other startups hubs will play a large role in Paris’ continuing evolution.
Kayser-Bril recognizes that his project is bigger than just bringing the German news to a French-speaking audience. “We see ourselves as a community more than a website,” he says. The tech world isn’t a zero-sum game, and the community that Berlin Maniacs is building is one that will benefit both cities.